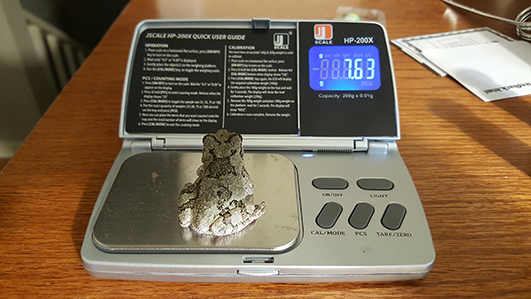 This is how we ended up with the world’s cutest frog. This tiny frog suddenly appeared in my kitchen, so I built him a paludarium.

He showed up on the counter, near the teapot, one day in late November 2020. Maybe he was attracted to the warmth?

Most of the shrubbery outside had just been cut all the way down, it was hard to find insects, it was getting cold, I’d brought some plants in a few days previous, but who knows how he really got there.

It didn’t seem frog friendly outside, so we (I) decided to keep him temporarily. I put him in a plastic box with some sticks and rocks. He actually ate a worm I found. It wasn’t gradual; he eats by lunging onto his food. He was probably very hungry.

I researched what frogs eat afterward, because I was wondering if I’d accidentally fed him something toxic. Maybe you didn’t know that frogs can only vomit by turning their stomachs inside out, outside their bodies. Worms are OK frog food, though, I was relieved to discover.

Now I can’t bear the thought of a bird eating him, so he might be here for a while.

I learned what a paludarium was (it’s a terrarium/aquarium combination). After a few weeks, more research, and some shopping, I put one together. Evan doesn’t really need that much moisture, but the enclosure we got would allow about 4″ of water in the bottom, and I’d always wanted to build a little woodland water feature in my house, so I went for it.

I took a while to come up with a design; ended up with a right stream bank, a left bank, a rock tower in the back for a waterfall, and water area with a stone island in the middle.

Either from stress or trying to blend in to a new environment, Evan changed colors much more extremely than previously, starting with a pale ashy white that made me wonder if he was hemorrhaging somewhere.

A few days later he started singing. Maybe it’s not that bad in there.

Eventually it dawned on me that the teeny tiny frog in my care might feel safer with more leaves to hide in. Fortunately, I’d been taking care of a vigorously enormous pothos vine for years without really knowing why. Finally it had a purpose, and maybe so did I. I kept adding pothos.

Notice the how his neck inflates? That, and the extremely loud singing sound he makes (kind of a high buzzing call – you can look for a recording), proves he’s a boy.

2021-02-15
Previous Post: What to do when contempt doesn’t seem to be winning elections
Next Post: Improv/Comedy Classes in and around the NC Triangle, 2021